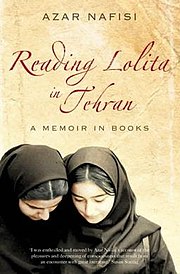 Book report time. But first: A rant. Why are people picking on Jessica Seinfeld? She seems like a perfectly nice person who cares enough about her children to pre-cook and puree vegetables for them every week. Is this really worth fussing over? I’m not going to follow her plan myself. Mostly because I’m too lazy, but also because I kind of sort of agree that it’s better in the long run if you just get them used to the idea that they gotta eat ’em and that they do sometimes taste good. But, seriously, the fuss to me is too much. She isn’t harming us. No one’s making us buy the cookbook, and certainly no one is coming into our living rooms force-feeding our children spinach brownies – and if they were, really, wouldn’t we thank them? It’s not cool to me, and I feel we need to let her be.

Okay, Felicity loaned me this book because it’s smart and because the idea of it is so lovely – a memoir in books. Gotta love that. And I did. So many things to thank this author for. First, that she left me free to never actually read Lolita. Based on her description of it, I’m very grateful for that. On the other hand, she did make me want to pick up some books by Henry James. And she informed me that Sheherezade (of the 1000 tales) was a woman. I had no idea.

Most importantly, she made me care about Iran. Having written a memoir myself, I expected she would make me feel embarrassed about that. That I would feel shallow and terribly distant from the real problems of the world. But that wasn’t the case, and I was grateful for that too. Instead, I saw my own problems staring back at me – just dressed in a long black cape and involuntary head scarf. I saw my own tendency to blame my decision-making, my unhappiness, or my loss of identity on something that happened to me rather than on my response to it. And I saw the familiar struggle of being in a situation you want to change, but not knowing how long you can stick it out and fight for the change, while failing. It was beautifully told. And very sad, although not in the way I expected. It is one of those wonderful stories that remind us we are all connected, which as Kate quoted in my comments section once, is why most of us read in the first place – to know we’re not alone.

It’s kind of my greatest dream that someone – anyone – anywhere in the world would read my own book one day and realize that. Maybe someday . . .