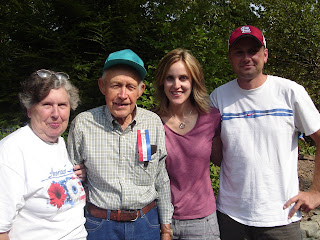 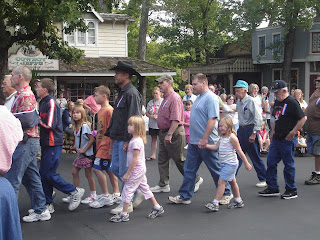 This is Mr. Grubbs. He’s Grandpa to me, Pap to many, and Clifford officially. He’s loved by everyone who knows him. And apparently if you go with him to Lambert’s at 8:30 p.m. on a Friday night, complete strangers will pay for the meal.

She was a friendly stranger though with long, pretty reddish hair. She walked right up to Grandpa while we waited with the masses on Lambert’s porch. She told us she was a songwriter and a preacher’s daughter. Our table was ready before hers. We ordered just what we wanted, including all the extras and even the 2 dollar drinks (or is it 3 or 4? They really get you on the drinks). But when Grandma asked for the bill, our waitress said, “Actually, you’ve been blessed today. Someone already paid your ticket (and my tip, she added later). The lady who paid it said she just loves that Mr. Grubbs.”

We were there because Michael and I drove Grandpa and Grandma to Silver Dollar City this weekend to watch my brother-in-law’s band perform. Grandma called me Friday morning: “I have a crazy idea,” she said. And by the evening, the four of us were off on our whirlwind visit complete with the plan to eat supper at 8:30 at night at the famous restaurant where they throw the rolls. I called Mom at that point to tell her I was out with a bunch of crazy night-lifers.

We had the best time. It was so fun to surprise Felicity and her husband. And Grandpa and Grandma know all kinds of things about the park we didn’t know – like the awesome breakfast buffet before the rides open. And the veterans parade they do each day to raise the flag. You can see Grandpa marching with his fellow veterans. Grandma has seen him do it several times, but it still makes her eyes water. I happen to be reading a very horrific story that took place in a very oppressive Islamic Republic of Iran, so I was feeling even more grateful for my country than usual. The ceremony moved me as well.

I googled our benefactress (“It was our whole table actually – we pitched in together”) later that night. Her name is Chelsea Perry, and you can see her music video at that link [no longer available]. Someday I’m going to find my own “Mr. Grubbs” at a restaurant and do that very generous thing, because I so want to make someone feel some day the way she made us feel that night. But for now, I kind of like the Mr. Grubbs I already have.