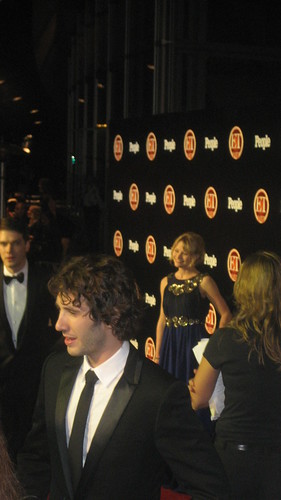 Michael did wonders for my Sunday night blues, which had actually hit around noon that day, when he discovered it was Emmy night. I don’t know why that one always sneaks up on me. The Oscars I obsess over starting about – well, now actually. (They don’t happen until February or so.)

If you’ve read my blog before, you know I have a love-hate relationship with Hollywood. Except without the hate. I expect good things from them. Expect them to impress and thrill me. I’m very generous with the way they dress on the red carpet and usually very willing to approve all kinds of flamboyant colors, big fat bows by their necks, strange messy hair-do’s, geometric patterns – all of it. Bring it on. I love their funny speeches, love it when they make fun of themselves, love it when they cry.

But this Emmy night I found myself being a little . . . flinchy. I think it’s because I had seen this video with Matt Damon shortly before. Now, like I said, I love Hollywood. Matt Damon to me is the nerdy, adorable thief in the Ocean’s movies who beat out Brad Pitt and George Clooney one year for People’s Sexiest Man Alive and wrote the endearing note that “this dad from the suburbs” was extremely grateful for having been noticed in that way. I like him very much both for that and for being practically in junior high when he won his Oscar for Good Will Hunting, because I like seeing really big dreams come true. And, as I said, I love Hollywood in general. Along with the messy up-do’s and gaudy bows, I also allow quite a bit of political bent in them. I think they have every right to spout a political opinion now and then. They’re Americans. Just because I prefer it when they play pretend doesn’t mean they’re uneducated.

But Sunday, like I said, I was flinchy. It seemed that every one of them when they walked onto the stage was actually snarling. As a group they seemed so angry about the past eight years. So very angry. And they seemed to be angry with me – the little conservative girl in the midwest whose been a little too slow to acknowledge global warming and a little too narrow-minded in her social views. I mean, I pay these people’s salaries. Not like an employer pays an employee but like tax payers pay the king, or perhaps like tribes-people sacrifice to the gods. I adore them. And I adore what they do. And I just wish they would keep influencing me through their art instead of their hatred. That’s all I’m saying.

So I chose this picture by watchwithkristin on Flickr becuase it has Josh Groban in it (and in the background, Claire from Lost) because he was probably the only part of that night that was sheer happy entertainment. It’s hard to snarl when you’re singing the theme song to Friends.