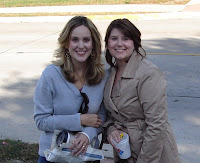 This is Sarah Dunn, previously mentioned in the comments section on another post and also the friend who gave me her seat ticket from Regis and Kelly one very big year in my life. This time, it’s not a ploy to get you to comment, Sarah. It’s just that I’m watching the debate and planning to bring up politics again, so I thought a picture of you, the girl who went to a political rally for her tenth wedding anniversary, would be appropriate.

Most of you dear people who read my blog would say that the only way to vote responsibly is to study the candidates. Some of you would add, “and to pray.” I admit when it comes to studying, I’m failing this course. I study writing and parenthood and books I need to read and educational attractions in Washington D.C. and museums in Chicago. But I just haven’t made the time to compare voting records, figure out what the heck they were actually voting on, and research the financial data that would tell me once and for all what’s wrong with our economy and which guy has the right idea for fixing it. Truthfully, I have begun to wonder if that is even possible.

Is it possible to truly understand what’s wrong with our economy and who has the right idea for fixing it? Is it truly possible for me – a girl in small town Missouri who is much more obsessed with her 2-year-old than with foreign policy – to understand today whether or not we should have gone to Iraq? Whether or not withdrawing now would be a defeat? If the leaders of our nation can’t agree on that, can I even begin to understand it?

I feel that because I have failed to study, and because I have lost a bit of faith in my ability to hear God speak on something like that – I’ve lost that faith because I know too many Christians absolutely convinced in opposing directions – I feel that because of those factors, what I’m left with is trying to figure out which candidate I believe. They fundamentally disagree on all of those big things – and fundamentally disagree is their phrase for it – the economy, Iraq – even each other. They disagree on each other. They tell me the other guy isn’t telling me the whole story about his health care plan. They tell me the other guy is lying about what he supports, because he voted for this or that thing that proves it.

They each think they know what to do. And I feel that all I’ve left myself to vote with, is my heart. And whether or not I believe them.

Perhaps, without slinging anything too ugly or hateful, you could just give me some suggestions on how you came to your decision and what else you’ll be carrying into the booth besides your heart. And if you even carry that – as I know of course, it can be misleading.