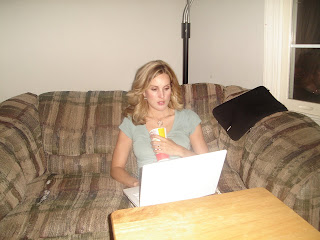 I have a scene in my memoir – well, in my life I guess – where Felicity was trying to teach me the power of music. It’s a funny remembrance tucked into a terrible moment when I was terrified and trying to fall asleep the night I was diagnosed with cancer.

I could never make it long in a vehicle before I was absolutely certain that I would die if I could not get out of the car and pee. Immediately. I was known for this. I’m still not great at it actually. One day we were only minutes away from home and I had to go so badly I was crying. Felicity was just sure that if we sang together I would forget about needing to pee. I told her that was ridiculous. But she wore me down, and she was right. As I harmonized with her, I stopped crying and forgot the pain. So, the night that I couldn’t sleep because I was so scared of my cancer, I sang. And fifty miles away, Felic was singing herself to sleep as well.

You may have heard the tragic news about Jennifer Hudson and her family. It terrifies and angers me that crime like this exists in our world. A world in which I raise three sons. I’ve gotten better at facing this terror, and I have a certain kind of peace anyway when I think of such things. But still, it troubles me. And this morning, I went to Andrea C.’s blog. And I was so settled by her music there. I have the tab open still so that I can hear it as I work.

Many, many days after work when I have to move from the paycheck job to the rewarding-in-and-of-itself (wink, wink) job, i.e., cleaning the kitchen and fixing supper – I open my laptop and turn on my little iTunes library of songs that mean something to me. And after only a few notes, well, it’s like the “Name that Tune” of soul settling. I love music, and I’m so glad Felic taught me to love it.

I had a theme song for each of my sons when they were babies. They got more sophisticated with age. John’s was to the tune of John-Jacob-Jingleheimer . . whatever, only I sang his own name and changed the words to suit us. Drew’s was “Hey Jude”, only – again – the name change and other lyric adjustments. Jake’s was Faith Hill’s “Lucky One”. You’re mine / That’s all I need to know / The sun shines / everywhere we go / It’s all right / Cuz’ I got you to hold every night / I’m the lucky one.”

But now I’ve settled on a theme song for having sons in general. It captures the feeling so perfectly. It’s from the animated film Spirit. And when the young stallion is born, Bryan Adams sings, Here I am / This is me / I come into the world so wild and free. The music, Adams’ voice, and the lyrics all work together in such a way that it could not more perfectly capture the thrill of birthing a son.

I have more of course – like the love songs that seem to have been written just for Michael and I. The songs about faith that center me every single time no matter how uncentered I was feeling. The songs about heaven that make dying less sad. The songs about “someday” that thrill me. Music fixes me. If you need settled today, try Andrea’s blog for a few minutes. Or go to You Tube or iTunes and look for the songs that matter to you. For me, it works every time.