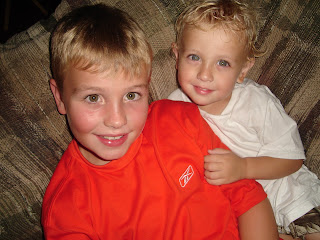 I don’t know about my strongest McCain-supporting friends, but I feel very peaceful today. McCain’s speech made me sad for him. Charlie Gibson set it up by saying that McCain was a wonderful human being, “And I know his speech will be extremely gracious.” And it was. I thought it was beautiful, and I felt for him and for his avid supporters. Then I couldn’t wait to hear President-Elect Obama speak, because I knew it would be hopeful and uplifting. I have to say I was surprised at his reserve. I felt he was deliberate about not setting himself up as “our savior” as so many critics have accused him. His speech was also gracious, and it was honest about the work ahead.

It was other people’s words that actually moved me more. It is impossible not to feel proud of my country when I hear someone like Donna Brazile say that Barack Obama will be inaugurated on steps that were built by slaves, men who probably never could have imagined that a black man would ever be taking the oath of office on the structure they built. I feel very moved by that just as I feel moved by the hope our president-elect has inspired in people across our nation and the world.

But there was one person I was worried about today. This is my sweet John Michael. You may know him as my oldest, the boy whose birthday I call the anniversary of my motherhood. The one who thinks donuts are too sticky and who once ironed a pair of shorts. And he believed in McCain. He got this passion all on his own. As you know, I wrestled with my voting decision almost up until the moment I walked into the booth, so I certainly wasn’t feeding him any propaganda. Michael decided a bit earlier than me, but was hardly campaigning for any candidate either. John heard about the candidates at school and made his choice. Some of my readers won’t understand this, but we’re talking about a 9-year-old boy who just received his first hunting rifle for his birthday, so gun control issues were important to him. The second issue, I’m not sure where it came from – but put them together and he believed that Obama meant to take our guns away and make boys and girls go to separate schools. I can’t think for the life of me where that second idea came from, and I’ve assured him it’s untrue – as is the first.

Still, though, like my 7-year-old, they just had a fixed idea that as Drew put it, “John McCain just seems wiser.” So when John came to me this morning and asked excitedly, “Who won?”, all that hope talk and look-how-far-we’ve come stuff went right out of my head as my heart ached for a little boy who can’t even vote but had learned to care. I was so proud of him for forming his own opinion and for standing by it despite plenty of voices around him suggesting otherwise. And I was sad for him.

So, Mr. Obama, you move me. You’ve raised a lot of hopes in this country and abroad. But I’m afraid there’s a very big task ahead of you for my heart. I’m so proud of my little guy for embracing so thoroughly the beauty of the country in which he was so very lucky to be born. Please don’t let him down. In four years, I hope he’s more proud of it still.