Remember that line from You’ve Got Mail? And then he “forgives her”. I wouldn’t want to be the person to say something like that this year.

Each morning I drop off my third-grader at Ray Miller Elementary then turn right on Jamison to take my second-grader to the primary school. Today I was so excited to vote that I turned left on Jamison instead, which was the direction for my voting place. He was wrapped up in a toy and didn’t notice either.

Pretty soon, though, he asked me a question, and the sound 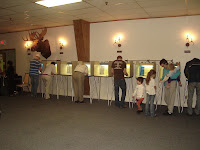 of his voice scared me half to death. So I whipped the car around in someone else’s voting location and got him to school on time.

I took my camera, because I was hoping there would be a big, dramatic line at the polls with “America the Beautiful” playing in the background in sort of a movie motage that is the greatness of democracy. Not so much. Although there were a lot of people there. I used to vote at the health department but this year
was moved to the Moose Lodge. I bet you big city folks
didn’t get to vote with a giant moose head over your booth. 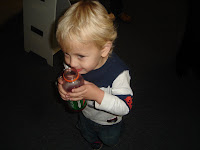 I usually take all of my children too, but this year I just took Jake. I like to have at least one of them tagging along, witnessing the wonder of America. Jake was thoroughly impressed, but I think it was mostly with his red Gatorade and the fact that the older ladies kept telling him he was pretty. My boys get that descriptive a lot in the toddler years. I don’t mind, and they don’t notice – so it works out.

And my sticker, although you can’t see it here very well, is a
lovely “We the People” version with I Voted Today
at the bottom. I love our country. 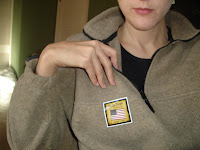