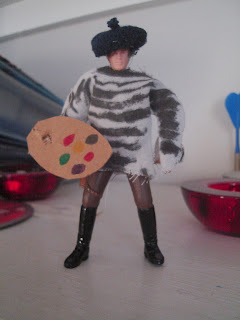 You may have guessed from my snack debacle that I’m not so much with the sewing either. I made a couple of dresses in high school. They fit and everything, but I didn’t exactly take to it like the easier things in life. I was actually feeling put out with John’s wonderful teacher. I couldn’t believe she was asking me to sew.

But check it out. I didn’t do too badly I think. I realize it looks more like a giant mushroom top than a beret and more of a wool poncho than a soft white top, but seriously, this doll is really small. He’s a french painter guy, and this is exactly the image you’ll find all over the internet if you google “frenchman’s costume”. If you simply google french costume, you get french maid lingerie. When you google french painting you get equally astonishing (though beautiful) images sure to make a 9-year-old boy squirm. We actually added the paint pallet to further identify the character. The whole thing looked more complete that way even though I didn’t really know if that was appropriate. I told John to just explain that the French contribute a lot to the arts. Then say, “Like their famous museum, the Louvre.” I think he’s already forgotten that, but it does look better with the pallet.

John put the stripes on the shirt, but I sewed that baby with my own two hands and even got it turned right side out and onto the stiff, uncooperative arms of that doll. But the hat! Oh, the hat is my pride and joy. I knew we needed a French beret. It was the signature piece holding the whole thing together. But how do you make a French beret for a doll’s head smaller than your index finger? Yikes. I made it with two cut-out circles from an old blue sock, put a piece of Diet-Coke-box cardboard between them to stiffen it and then topped it off with the sticky up thing – also pieces of sock. Then, the most creative part, I had to sew the thread through the hat and then under his (almost nonexistant) neck a few times to get the thing to stay on.

I’m very proud. I forgave John’s teacher and showed it to Michael with glee. He gave his approval and then asked which poor soldier had been sadly reduced to this.