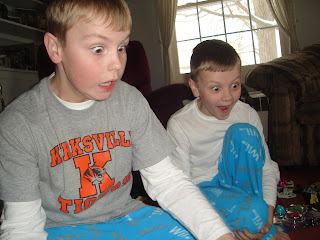 Agent Holly:  You will be happy to hear, in the words of Drew shortly before this picture, “We.  Just got.  A Wii!”

So now when I am overcome with anxiety over whether or not I am any closer to beginning an actual writing career, I’ll simply pick up a remote and bowl.  I’m really good at the bowling.  Not so much the tennis.  I end up jabbing at the air in front of me as if trying to poke my little Mii into responding to the ball rather than reacting to it myself.  “What does it say about you, though,” I asked Michael, “to be good at bowling on the Wii?”  It doesn’t seem like something you could put on a list of assets, talents, or even handy little knacks.  It just is.
I drove to my parents’ on Christmas Eve.  The roads were covered in patches with packed snow, and Michael was home sick.  I have never felt so happy and so refreshed by a home-going though.  I needed it desperately that day for some reason.  As I drove there alone, I panicked when I realized that I had not yet read the directions for – nor placed in my vehicle – the car escape tool Dad got me for Christmas.  It cuts your seat-belt and breaks your window and punctures your air bag and all kinds of other important things if you have an accident that leaves you trapped inside the car.  I thought how awful it would be to have a wreck on Christmas Eve on the way to his house and not have the safety tool he had given me.
Now it is safely placed in the pocket of my driver’s side door, and I feel so much more prepared for life.  It’s nice to have a little bit of Dad’s protection beside me in the car as I drive.  Just like it was so nice on Christmas Eve, when the day kept feeling so decidedly un-Christmassy and the boys kept spilling things and I realized I still hadn’t bought enough wrapping paper (Walmart again?!), to know that I was going to Mom’s just as soon as my work day was over and that she would rescue Christmas from the moment I walked in the door.  I was wrong though.  It was rescued the moment I saw the lights of the little town where she lives.
We’re headed into the second week of Christmas vacation for the boys.  They look so forward to it.  And then sometimes it disappoints.  They get bored and miss their friends and routine.  Jake likes having them around but finds that they sometimes mess with his universe.  They wake up every day certain something exciting will happen, and their faces droop to find me working (what is this strange part of grown-up life that you work on Christmas vacation?!) But I’m going to try and rescue it for them.  I’m pretty sure I can.  I just hope I have enough tools.
one more wish for magic
extremely random movie thoughts, and by the way – Happy New Year!