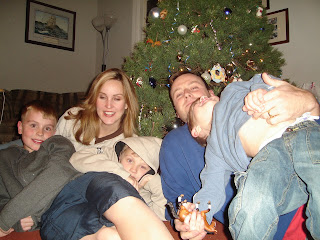 We had a little trouble capturing a Christmas card this year.  I wouldn’t expect one if I were you.  Doesn’t Drew (in the middle) look like he’s starting a modeling career though?  Check out that perfect uncaring pout.  And believe me, it’s a pose.  He was in a perfectly good mood here.  It was Jake’s mood that threw things off, as evidenced in the second picture here in which Michael is holding Jake’s teary face toward the camera.  Merry Christmas, indeed. 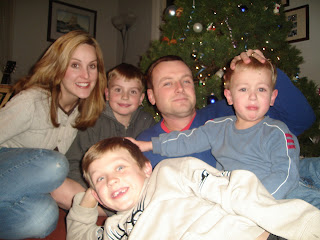 I can get kind of upset about things not turning out as I’d like them to.  But, I don’t know, this year I just love these pictures.  And not like you love those blooper pictures that you try for – you know, “Now everyone look silly!”  No, these are seriously unfortunate pictures.  Not a one of them turned out pretty.  And I didn’t care.  I was really tired that night.  But I find that today – when I’ll probably choose the least appalling one and upload it to Walgreens – I still don’t care.
What I care about is how much we laugh together, whether or not we’re understanding each other and focusing on the same important things in life, whether or not the kids feel loved.  You can’t put that stuff in a Christmas picture.
So I gave up early on the picture-taking that night.  Between each shot, I swear, they were rolling around on the floor wrestling – arms and legs flailing, Jake getting cheered up by not being forced to perform for Pete’s sake!  And then I would just click the timer on the camera and yell okay and they’d plop themselves into some sort of seated position while I squeezed into the mayhem.  After a few shots, I just got tired of stopping the fun.
Christmas won’t be perfect for any of us this year probably.  We’ll cut corners and hang fewer lights and buy smaller presents.  With the chaotic pace of life, sometimes Christmas isn’t as poetic as we want it to be.  The night I put up the nativity I found that with three small boys it’s not as easy to capture the solemnity of the moment as we always did with Mom.  I ended up getting the box down and yelling to various rooms, “Everybody get in here!  Linus is telling the Christmas story, and we’re all going to sit here and watch it!”  So they did.  And then they snatched at the shepherd and wise men and baby Jesus and plopped them on the shelf with excitement nowhere near solemnity.
And last night I had it in mind to watch It’s a Wonderful Life.  I was determined it was the only way I could go to bed happy.  But we all went to the Y instead.  I took a yoga class, John had basketball practice, Jake found that heaven is a rec center play room.  We were there way too late to watch a movie afterwards.  And an evening at the Y is such a different picture than an evening in front of Jimmy Stewart with chocolate and angels getting their wings and such.  I mean we ended the night playing Ms. Pacman and Galaga for goodness sake.
You just can’t decide ahead of time what life is supposed to look like – even Christmas – and only be happy with that.  It’s like our Christmas card I guess.  I’d rather live a great picture than take one.
I went to school today and stumbled into a Christmas concert
I have the best idea for the next season of Survivor