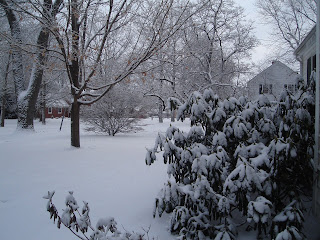 So I guess we’ll have a white Christmas this year.  I should have taken a picture right across the street.  Dave’s house catches snow like a perfectly frosted gingerbread house.  Only it’s a beautiful dark gray instead of brown.  I don’t say “Dave’s house” as if you know him, but simply because it’s a pretty view from my house that I’ve mentioned on the blog before.  If we ever move, I think I’ll remember this house more for that poetic view than anything else.  “Remember how Dave’s house looked at Christmas time?”  I’ll probably say things like that.  And, remember how Dave actually raked?

Tonight I’ll wrap presents with the tiniest bit of anxiety, wondering if and hoping that my children still believe in the magic of Christmas once they’ve opened the presents tomorrow.  I saw a rerun last night  – a behind-the-scenes look at The Grinch cartoon.  And a man said, “Everyone hates Christmas a little bit.  No one would dare deny that.”  Now, if you’ve been hanging around the last few weeks, you know that I really like this time of year.  I believe in the magic so much that I seriously expect complete strangers to walk up and hand me money.  (They did last year!  Well, it was a diaper coupon, but if diapers are on your grocery list, believe me, that is MONEY, BABY.)  I think the sound of the Salvation Army bell is the loveliest of the season and the Merry Christmas said between us after I’ve dropped my money in, perfect in sincerity.
But still, I understood what that guy said.  Because no matter how hard we try to make it about everything except the presents, it still becomes about them a little bit.  And wondering if my kids will still believe the magic after Christmas morning is always a little moment of angst for me.
But on that note, you should see me the day after Christmas.  Ooh, I love that day.  All the gifts are unwrapped, and we’re reveling in them.  My kids were grateful and happy and so full of magic that it’s shooting from their fingers and their toes.  I’m looking forward to that.
Next time I write, Serenity Now will probably be dripping with New Yearsy thoughts – all that hope and new beginning stuff.  I’m kind of big on that.  So, consider this my Merry Christmas message.  Here’s hoping you’ve got magic shooting from your fingers and toes.
I have the best idea for the next season of Survivor
I’m thinking a movie on a weekday at nap time . . .