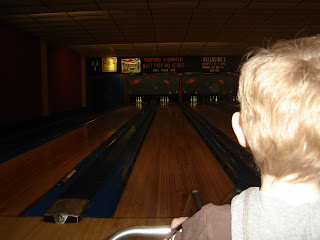 So, the Wii totally inspired us.  There couldn’t be that much difference between a small, rectangular remote and a 10-pound ball, right? Surely we’d learned to throw straighter, aim better, grab a spare like kids find trouble when you’re busy (every time). The Wii is good for something right? Yes. It’s good for completely disorienting you into thinking you’re some sort of athlete when you’re actually no better than someone surfing channels with a finicky remote that you have to point in several directions to get to work and maybe punch the buttons more than once while standing (occasionally). It doesn’t really prepare you for these big, slick lanes, the aforementioned ball, and these strange blue valleys all along the sides of the lane that literally pull your ball towards them like a magnet. I’m not even kidding. I was pretty bad. Although I kind of lost my Wii bowling magic as well, so maybe the game’s just against me.

Despite all that, though, I had the best night. Jake is three. THREE. It’s the third anniversary of hands down the happiest relief of my life. We made it. Jake Kenneth Bohon, born eight months after the worst doctor’s visit of my life, 26 weeks after undergoing general anesthesia during my surgery, about four hours after Michael promised I will never do this to you again (a promise I did not extort), and 1 tiny second before I knew I had just met one of the very coolest humans on the planet. You’re so worth the gutter balls, Jake. Every single one.
but it will not be this day . . . and other great motivational speeches by men in medieval armor
looks like I need to hit the cinema before Oscar night