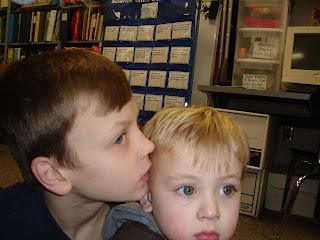 Here is some love to start off your weekend.  It’s not a great picture because I was sitting above and behind them on a stool and tried to inconspicuously hold the camera in front of them while they listened to the story.

The story taught us about St. Valentine, the Christian physician/priest attributed with healing a little girl’s blindness.  I didn’t even know this man existed really.  I kind of thought Valentine’s Day was invented by St. Hallmark. 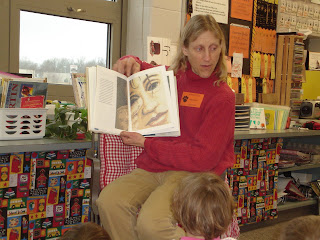 You know where I learned about this Christian man and how he was killed by Roman execution for his faith?  In public school.  I kept waiting for someone to flinch or throw stones or rush their poor defiled child from the room because they were being inundated with Christian teaching in a public school.  But it didn’t happen.  So I just soaked it in.  It was a very nice story about how he tried and tried to heal the girl with a little salve he had made. Then he was taken to jail and from there wrote her a note that said, “From your Valentine.”  And apparently the girl regained her sight at some point after that.

But before we Christians get too cocky about how one of our own is the reason for this awesome celebration of love, you have to read the Afterward.  It’s there that we learned that although St. Valentine did send that letter and was executed on February 14th, it was on February 15th that the Romans (those crazy pagans) had a celebration each year in which the young maidens wrote notes that were drawn from a jar by the young men who would then court them. Put the two together, and wah-lah, the founders of Hallmark rake in their glowing, love-filled profits.

There are a lot of Christian holidays and traditions that come straight from those crazy pagans. We’re always trying to take their stuff and make it holy and call it our own. But I don’t really see it that way. Almost everything in place today is a combination of several ideas. “There is nothing new under the sun,” the bible says. Personally, I believe Jesus holds the corner on the market of Love. What I believe about Him – absolutely believe – makes His love the best, the most wonderful, the only one without reproach or hidden agenda. So I like the story of St. Valentine, a man who believed that too. But I like the story of the Roman maidens as well. And I don’t mind if they are really the ones who gave us the idea to slap some love on a note and hand it to someone we care about. I don’t mind that at some point the two traditions came together or even that today it seems more like a celebration of capitalism than of love.  None of that can undermine what real love is and that in so many places all over the globe – real Love is happening every day and spreading like wildfire.

I love this holiday.

do you suppose Great Wolf Lodge will pay me for this endorsement?
books on film