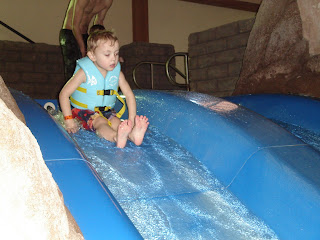 I remember Dad telling me once that kids like repetition.  After being at a water park with Jake for two days, I’ve decided that is an understatement equal only to, I’m okay with eating chocolate and we sort of have to breathe to stay alive.  I sort of got a clue the first day when the older kids were rarely in the same part of the park for longer than five minutes, most of the adults varied their activity off and on, and I sat watching Jake go up the stairs and down the red slide so many times that I ceased to discern the difference between the slide and the water.  The next day Michael mentioned that he was feeling kind of ashamed that most parents were 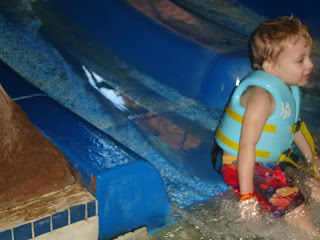 in the pool with their kids while we sat idly by as Jake made a playmate out of his hand.  I am not even kidding.  He talks to his hand sometimes.  He calls it Jakey, asks if Jakey would like to do this or that, answers, yes okay, and then does it.  He also got really tired by the second leg of the second day and wanted to keep playing but could barely hold his head up.  So, I decided to join him.
He held out his hand.  We walked together up the stairs.  He let go, plopped on the blue slide (the second day’s riveting variation) and slid down while I descended the stairs on the other side.  Then he held out his hand again, I grabbed it, and we did the whole thing again until I was literally dizzy.  Somehow walking around and around that little routine felt more engaging than just watching him do it.  And I needed some variety by that point.  Plus, he didn’t talk to his hand anymore as long as I was holding it.
We were at an indoor water park in Kansas City celebrating my sister-in-law Mary’s birthday.  Which is interesting, because I didn’t see that girl go down a single slide.  She even told me she’s squeamish – the heights, the plummeting from them – all of it.  She has kids the ages of my older two, and one could assume that she chose the location for the uninterrupted rest and reading time that comes with the children being so happily occupied.  Trust me, though, there are much quieter places to read and relax.  Places where hundreds of children don’t run around you screaming, shaking water on you with their oblivion and dumping it on you on purpose if you chase your toddler through the jungle gym area underneath the log in which they have been storing it up.  Places where the smell of chlorine hasn’t reached toxic levels.  This, I believe, is the power of motherhood.  To find a place thrilling simply because it is that thrilling to your children.  We’re going to sleep right upstairs from three giant water slides and the pools and log-climby things and tree house with the giant bucket on top that dumps 1000 gallons of water every 5 minutes?  AND I CAN GO THERE?!  These are not the words of a twenty-five or so (you’re welcome, Mary) year-old woman.  They are the words of her children, and therefore music to her ears.  It is so stinking fun to thrill them.
it’s February fifth – this is only the beginning
but just that place in between