Another song title – I can’t help it; they move me.

This is just a little lesson from my journal sometime late fall/early winter of 1999, which some of you might remember as the best months of my LIFE, because they were the first few months of my motherhood.  I had started working from home that year too, and I was very happy in most things although as dramatic as ever in others.  One day I wrote in my journal while John Michael lay nestled on my bent legs – our favorite way to sit together.  And I wrote about how I was always penning the big emotions and giant dreams and plans but that someday, when I read my journal again, it might be interesting to me that John Michael was starting to grab at things and what movie we had watched the night before and that we’d decided to teach our kids to say “Papa” instead of “Daddy” because of cute little Emma Pihlstrom running through the Christmas tree farm calling her Swedish father that.

Last night I read the profiles for the American Idol contestants and loved the one who said that his goals in life were to be a good husband and father and to not have any regrets.  Eh?  You know we can see you on a reality television show designed to catapult you to vocal fame, right?  Of course he does.  But that’s just the no regrets part.  He’ll be okay if he’s not catapulted to fame.  He just wouldn’t be okay if he hadn’t tried.

Then I downloaded I Hope You Dance to my iTunes today, a song I adore because of all the things it hopes you do every single day.  (“I hope you still feel small when you stand beside the ocean” – LOVE THAT).  I have a lot of plans and dreams, but the goal is every day.  Because when you come to die, it’s the way you lived those that you’re going to care about – much more than how much can be written as your accomplishments. 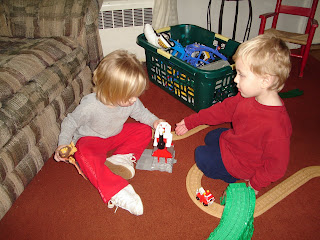 Today, we hung out with our friend Zoe. Jake is very into trains, and she happily played along. She lives just down the street, and her mom is one of my best friends. We probably won’t always live just down the street from each other.  It’s very cool, and I want to remember it.

I also want to remember Michael and John right now.  They’re watching the Mizzou game together. I kind of care, but I just don’t like to watch Michael yelling at those poor 19-year-old boys about their defense. It makes me flinch for them. 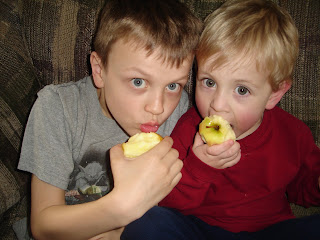 And here’s another thing Jake’s into: Apples. He says it with Z’s instead of P’s, but he eats them clear down to the core – like scary close to eating the seeds, which I hear are poisonous. It’s especially cute because that dude rarely eats all of anything.

I won’t normally tell you all my little details. I just wanted to inspire you to take happy note of yours.