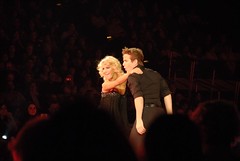 Last night’s Dancing with the Stars theme was for me, “What a trouper.”  (Is it trouper or trooper?)  Because with almost every contestant, I would make this little nurturing sound and say that phrase. With some it was just because this was their first time, and you could see their nerves begging them to stay in that stupid low-ceilinged room rather than subject themselves to that pressure. But they went out on that stage anyway, knowing the judges would criticize everything from their wayward bums to their gymnastic arms to their toe leads AND knowing that there was no possible way the majority of the American viewing audience could have any idea just how difficult it is to master the steps, the form, the choreography, and the emotion of the dance and manage to capture all of it at once.  Seriously, we have no idea.

But besides simply the first time jitters, there were two contestants who had exactly two days to learn the dance, because they were replacements for those who were injured. ONE of these last minute replacements was dumped by her fiance on The Bachelor on national television only one week ago. I was just as impressed with her pretty dancing and subsequent comeback to life as ABC’s marketing department intended for me to be.  (Even though the poor thing tried to tell us she is fine.) And then there was the cowboy.

The cowboy is Jewel’s husband, and the plan was that they would be the first married couple competing against each other. Then Jewel got hurt, and this poor shy cowboy is left all by himself on this national television program known foremost for its fake tans and sequined costumes. I really felt for this guy. He was so gentlemanly and unassuming, taking the criticism so bravely and stating without any sense of self-preservation, “I was very nervous out there.  And I’ll try to do better next time.”  Michael groaned when I suggested that we watch the show at all, but by the time the cowboy had danced Michael was watching with at least one eyeball and demanded someone get that poor man a horse so he could feel more comfortable.

So, obviously, they’ve sucked me in again with their colorful costumes and pretty music, and as always – though more noticeable this season – their bravery.  Maybe it’s not the kind of bravery you care to have in life. I definitely get that. Learning to move your hips is probably a long way from your bucket list. But I still say there’s something to learn from all that dancing. And for me, last night, it was all about being brave.

I meant to give you a happy post for Monday, but then we went to the dentist
I’ve missed you, Kansas City