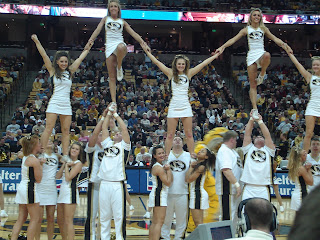 When we visit my surgeon in Kansas City, we’re actually in the Kansas side of the city.  And when we go, Michael likes to wear as many Mizzou clothes as possible.  This time it really paid off.  He got to talk sports with everyone from the waiter and waitress at Chili’s to a stranger in the hospital hallway to my surgeon’s residents.  (Not so much with my surgeon who apparently only appreciates sporting events for the beer and the ribs.  They serve ribs at KU games?)  Anyway.  I was really glad for all those takers, because I can’t really carry on an actual conversation about basketball with Michael.  However, today I am really loving Missouri, and that’s due in part to the Big Twelve conference champs – the Missouri Tigers.  Yes, I’m that kind of sports fan.  Give me a championship, and suddenly I’m really proud that you’re more my team than anyone else and that I even attended a game in seats so close to the floor I was embarrassed by the length of the cheerleader’s skirts.  So that’s one reason I’m loving my state today.  Mizzou.  Rah.

Second – and this is far more in keeping with the normal tone of the blog – I am loving a good country highway, and Missouri is full of ’em.  I had some things to mull over today, and the mulling was so stifled in the monotony of the house where the cycle of trying to work while trying to parent Jake can eventually drive a person insane with its sameness.  Then Felic emailed with the very cool news that an old college friend would be eating with her in the town where she lives and works about an hour away.  I finished up the work I was doing, clocked out, and hit the road.
There is nothing like a drive on country highway to clear the fog, except maybe time with my sister and parents, which is what I would find on the other end of the drive.  And I needed to clear the fog.  Technically, it didn’t work.  I’m still a bit unclear on the job thoughts I was trying to settle.  But, oy vey, the change in perspective.  A long stretch of country highway makes me feel suspended between obligations.  Jake relaxed the whole way to a movie in the back seat, so I knew he wouldn’t need anything the entire trip.  And somehow even in the age of cell phones, I feel unreachable on a drive.  At least, I feel like I let go of that feeling that I need to be available, constantly in contact with someone.  It’s like an escape seeing nothing but trees, pasture, and highway behind you and nothing but more of the same ahead.
I usually glamorize city life.  It sounds so cool to me to walk city blocks to work, have a favorite coffee shop two doors down, a hot dog stand nearby, and Chinese delivery every night.  But today I’ve got nothing but love for country highways, small towns, and Mizzou-Rah.  That’s what a good long drive can do for a girl.
I’ve missed you, Kansas City
writerly advice . . . that I should take