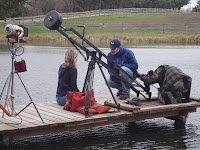 Hey, remember when I was in a movie?  I like to refer to it now and then. I found an article the other day about the film student who directed the short I was in (Brantley Ping, in the hat in this photo), and there is a photo referring to me as “actor Serenity Bohon.”  You know I bookmarked that baby.  After all, according to my 9-year-old (a couple posts earlier), it is one of the things for which I might eventually be famous.

All of this brings me to today’s small regret.  I could have been in a film with George Clooney, but I turned it down.  (Keep reading for the realistic version of that statement that was SO FUN to write).

Mom has this awesome knack for passing along information for opportunities that probably sound like torture to her but which she knows one or the other of us would love.  Enter a little ad she saw for extras in a George Clooney flick which would be filming at the St. Louis airport less than 4 hours from me.

I read all about it – you get paid, I don’t remember, eleven dollars a day or something.  And the days are hours and hours and hours beyond a normal work day (Okay, like 11 or 12).  But you’re in a film with George Clooney.  (You see?  That logic alone would have gotten me in this film.  I AM their target audience.)  And, listen, I had a whole other reason that was pretty good too.  Research.

So, I don’t know if regret is the right word. Those were some precious hours with my actual life that I don’t really wish I’d given up.  Still, in a couple of years, George Clooney should appear in a film called Up in the Air (with Jason Bateman too – I’ve loved you in everything you’ve done, Mr. Bateman) in which he is a “corporate downsizer obsessed with collecting frequent flyer miles at the expense of having a life”.  I’m thinking comedy more than dark drama.  But I’m pretty sure, I’ll be the girl in the second to last row, crying.