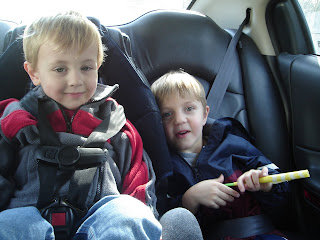 This is Jake (with his cousin Jude on the right), and I chose this picture because it’s pretty much the look he gave me this morning (or perhaps himself in the mirror) when plotting his behavior for the Parents as Teachers representative.

I had imagined the best and worst case scenarios of how he would behave that were well within his range of predictability, and he plopped himself squarely in the worst column.  He basically refused to participate in the game she brought.  And it wasn’t that he wanted something else. It was more like he had us totally figured out and so was not going to let us enrich his life today. He kept looking into my eyes like he was trying to get me to CONFESS that I was worried about him and brought some other woman over to make him roll squishy dice and count blocks. “Come on, Mom. What’s really going on here?  I never saw you play dice and blocks on the floor with another adult before.” If we had a code word for run, he was looking for me to say it. And when I wouldn’t, he ran anyway.

But none of that really fazed me considering why she was sitting in my living room with blocks in the first place. It happened – last week I think? When I looked up from my computer where I work basically all day, and he was watching a movie – which he does, basically all day – and I never felt more sure of anything than that I wanted to add some stimulation into BOTH of our lives. I love working from home, and I’m probably far more passionate about it than Michael is thrilled with – because I’ve never really struck it rich here.  But it’s got its downfalls just like anything else, and currently that downfall is the feeling that perhaps I HAVE NO LIFE.

So when the Parents as Teachers girl told me today that the expectation for language is that we would understand 90% of what a child says by the time they are 4, I breathed a big fat sigh of relief.  That might seriously be possible with a child who can pretty much communicate all his desires with a word (or its simpler descriptive friend) at this point and even answer the question, “What is your name?” in a semi-complete sentence.  But the greater thrill for me was the spice it added to our day.  Another face!  New toys!  Interaction from the outside world!  I needed that.  And I feel better for having given it to him.  Even if he did keep expecting the code word. (If only we’d had a code word for Dude, I’m pretty sure we’re graded on participation here. Just play with the blocks already.) Maybe I’ll work on that for next time.

Thus ended my prejudice against that warm, brownish thing they call tea
live every day on purpose