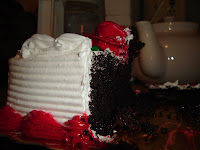 How pretty is this cake?  I bought it about a week ago when frugal, responsible Michael (somewhere his high school friends are laughing at that) sent me to the grocery store with meal plans for 14 days and the grocery list to match.  Fourteen Days.  That’s two carts once everything is bagged.  I’ve mentioned how little I enjoy the weekly grocery trip, right?  And fourteen days – well, not only did that mean longer in the grocery store, but also that many days that I wouldn’t have a single excuse to say, “Oh darn, let’s just order out tonight – it would be so much easier.  Sigh.

So, realizing how much money we were saving over that time period and how self-sacrificing it was of me to actually do the trip, I bought a CAKE.  A white cake with the whipped frosting, which puts all buttercreams to shame, and glorious life-is-actually-a-pastry red roses.  Not a single birthday or holiday in sight.  Jake and I pored over the choices – balloons, cupcakes with plastic animal heads on toothpicks . . . we settled on the roses, and I told him right then and there.  This is the reason you should want to be a grownup.
Admittedly, it didn’t quite live up to my expectations.  The roses (the little tricksters!) were buttercream.  A store-bought kind of flavor that bled into the entire culinary experience, decreasing the allure.  But I was still so proud that I took this picture of what it means to get to make silly, inconsequential decisions all the time all on your own that could very well make life richer – at least for the evening.
The new book I’m reading (by the author we met) is set in Chicago.  How much do I love Chicago now?  I’ve had to research it for work, and I am so embarrassed that I didn’t realize my pretty little midwest had such a treasure.  Because, you know, I’m claiming it now.  Navy Pier, Grant Park, Cloud Gate – the book talks about them all, and because I’ve researched them, I almost feel that I’ve seen and touched them – or at least that I have some sort of ownership in their greatness.  I still dream of New York, but People, Chicago is a train ride from here, and it is so on my list.  Someday I’ll buy that train ticket just like I purchased that cake.  I wrote about the Art Institute of Chicago on the Student Travel blog today, and posted pictures of its miniature rooms display, which looks dee-lightful. Linking to that blog post justifies the fact that the writing of this one bled a teensy bit into the work day.  Which brings me full circle, because that’s just what those buttercream roses did.
Road Trip, Baby
Good Friday