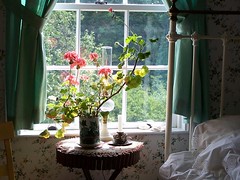 When I come into my millions, here are things you should expect to see in my sparkly beautiful home: One, this figurine I saw once – it was Sleeping Beauty’s pink dress with ribbons and thread and scissors all swirling around it, a replica of the scene where her dress was made by magic. Two, a cook. And three, a hardcover edition of every L.M. Montgomery book ever written.

I just read Pat of Silver Bush for the first time. I avoided it before, because I just couldn’t place a “Pat” in the golden era of Anne. Silly me. When I read it, though I didn’t enjoy it quite like Anne and Emily, I discovered yet again how thoroughly I love Montgomery’s writing.

I just sink into those books. Sink. In. I am in Prince Edward Island in the late 1800s in a way I simply don’t experience when I read historical fiction written by someone today. It’s the words like “drugget” I think, a type of dress or apron of which I had never heard before this book. And the fact that Montgomery’s characters are always calling their aunties “old fashioned” for still wearing such high necks and sanding their kitchen floors. It’s just so fascinating to read about a girl trying to talk her mother into “pyjamas” instead of a nightdress and know that the author actually lived in an era when that would have happened.

Anyway, here are some more things I love about her writing. And many of them, I’m just not sure would fly today.

1. The omniscience thing. Sometimes the narrator steps completely outside of the story. We rarely see an entire scene from only one perspective. The narrator tells us just what the boy is thinking even as the girl is wondering what he is. Sometimes she does this very cleverly through his words and the tone of it. But sometimes she just comes right out and tells us in the omniscient voice, as in, As for why he was worried about such a thing, I simply couldn’t tell you. I don’t think I should like this. It doesn’t seem in keeping with the strict perspective rules of today. BUT I LOVE IT.

2. She’s repetitive. Little themes are repeated throughout her books, turns of phrase, intense likes and dislikes – they show up more than once. Pat, for instance, thought having a best friend who was pretty was almost as good as if she had been pretty herself. Anne said the same thing of Diana Barry. And Pat and Anne both love trees like nobody’s business. And Montgomery likes to talk about a clan (i.e., big family) throwing proper weddings and such for the good of its reputation as a whole. Characters in Montgomery books are very proud of their clans even when they don’t personally like very many of the members in it. It’s a recurring theme I love, especially considering the fact that I think Montgomery’s own life was rather clan-less.

3. There are always old-fashioned aunties, crinkly old ladies practically laid up but who basically rule the roost, ugly boys or girls with hearts of gold, girls who never want to marry. Her heroines are never beautiful, but always stand out in a crowd. They’re rarely social butterflies, more prone to only one or two very close friends. There are always beautiful little girls who are very mean or spiteful, several false friends who flatter but have no character, and dreams. Her books are full of dreams. Her characters are very dreamy and poetic, and they suck the marrow from life in the most inspiring ways.

4. Nothing is ordinary. If it’s ordinary, it’s spectacular in its ordinariness. Houses, trees, lakes, and ponds – they all live and breathe with real live personalities, and they can therefore be liked or disliked based on how friendly they are to their guests. I love this lack of ordinary.

5. Someone always believes in faeries.

I don’t think an editor would let me jump from one character’s thoughts to the other in one paragraph. Would they? And readers today would certainly tell me if themes like these recurred over and over from one book to the next. And can you ever say “I” in a third person narrative?

This may surprise you, but L.M. Montgomery is the reason I’d like to write contemporary fiction. Because when she wrote her stories about the Anne girl with the long braids and the longing for puffed sleeves and the handmade clothes and horse-drawn sleighs, it was contemporary fiction. And I just hope I can write today’s ordinary things as extraordinarily as she did.

(photo of Green Gables by Product of Newfoundland on Flickr)